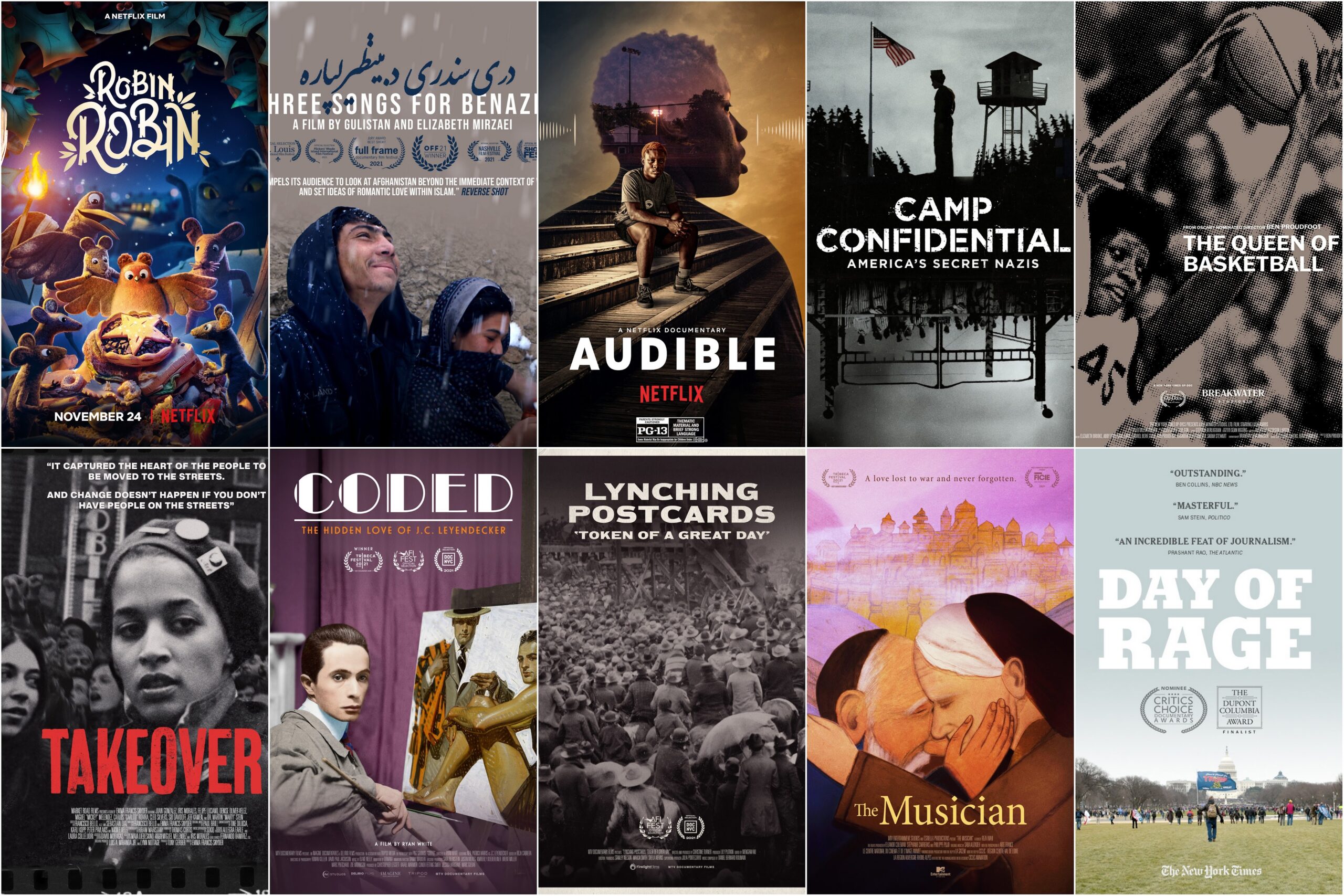 At the height of WWII, a group of young Jewish refugees are sent to a secret POW camp near Washington D.C. The recent refugees soon discover that the prisoners are no other than Hitler’s top scientists…After decades of being classified, this unimaginable story is now finally coming to light through recently released audio recordings and immersive animation. Post-screening conversation with co-directors Mor Loushy and Daniel Sivan.

The story of Shaista, a young man who—newly married to Benazir and living in a displacement camp in Kabul—struggles to balance his dreams of being the first from his tribe to join the Afghan National Army with the responsibilities of starting a family. Gulistan and Elizabeth Mirzaei’s remarkable access sheds light on the experience of modern-day Afghans who live, love, and seek space for themselves amid constant instability. Post-screening conversation with co-director/producer Elizabeth Mirzaei, co-director/producer Gulistan Mirzaei and producer Omar Mullick.

Audible is a cinematic and immersive coming of age documentary following Maryland School for the Deaf high school athlete Amaree McKenstry and his close friends as they face the pressures of senior year and grappling with the realities of venturing off into the hearing world. Amaree and his teammates take out their frustrations on the football field as they battle to protect an unprecedented winning streak, while coming to terms with the tragic loss of a close friend. Post-screening conversation with director Matt Ogens.

When her egg fortuitously rolls into a rubbish dump, Robin is raised by a loving family of mice. As she grows up, her differences become more apparent. Robin sets off on the heist to end all heists to prove to her family that she can be a really good mouse – but ends up discovering who she really is. Post-screening conversation with directors Dan Ojari and Mikey Please.

5. THE QUEEN OF BASKETBALL

She is one of the greatest living women’s basketball players. 3 national trophies. Scored the first basket in women's Olympic history. Drafted to the NBA. But have you ever heard of Lucy Harris? Post-screening conversation with director/producer/editor Ben Proudfoot, cinematographer/producer Brandon Somerhalder, editor Stephanie Owens and Lindsay Crouse of The New York Times.

J.C. Leyendecker, a gay man, whose early-20th century advertisements were coded with LGBTQ+ imagery that quietly acknowledged and spoke directly to a community that was forced to live in the closet. Post-screening conversation with director Ryan White, film participant Jari Jones.

From 1880 and 1968 over 4000 African Americans were lynched at the hands of white mobs. Staged as public celebrations akin to picnics or carnivals these lynchings were commemorated through the printing and distribution of photos and postcards that would ultimately be subverted by Black activists to expose racist violence in the U.S. to the nation’s leaders and to the rest of the world. Post-screening conversation with director/producer Christine Turner and film participant/scholar Dr. Terry Anne Scott.

During a vicious attack, a young musician and the love of his life are brutally separated from one another. Fifty years later, the musician is summoned to play at the Mongol castle where his beloved has been held.

Takeover explores the 12 historic hours on July 14, 1970, when 50 members of the Young Lords Party stormed the dilapidated Lincoln Hospital in the South Bronx and made their cries for decent healthcare known to the world. Through archival footage, seamless reenactments and modern-day interviews, we follow the Young Lords’ resistance against institutions curated by wealth and white supremacy, and their fight for the most basic of human rights: the right to accessible, quality healthcare. Post-screening conversation with executive producers Luis Miranda and Lynn Nottage. Moderated by Lin-Manuel Miranda.

DAY OF RAGE charts in chilling detail how the peaceful transition of power was disrupted by rioters who stormed a seemingly impenetrable seat of government. Viewers gain critical insights into the character and motivation of the rioters by experiencing the day through their cell phone videos, police body cameras, surveillance footage inside the Capitol, and the internal radio recordings detailing how the officers responded. Post-screening conversation with director Malachy Browne and Producer Haley Willis.