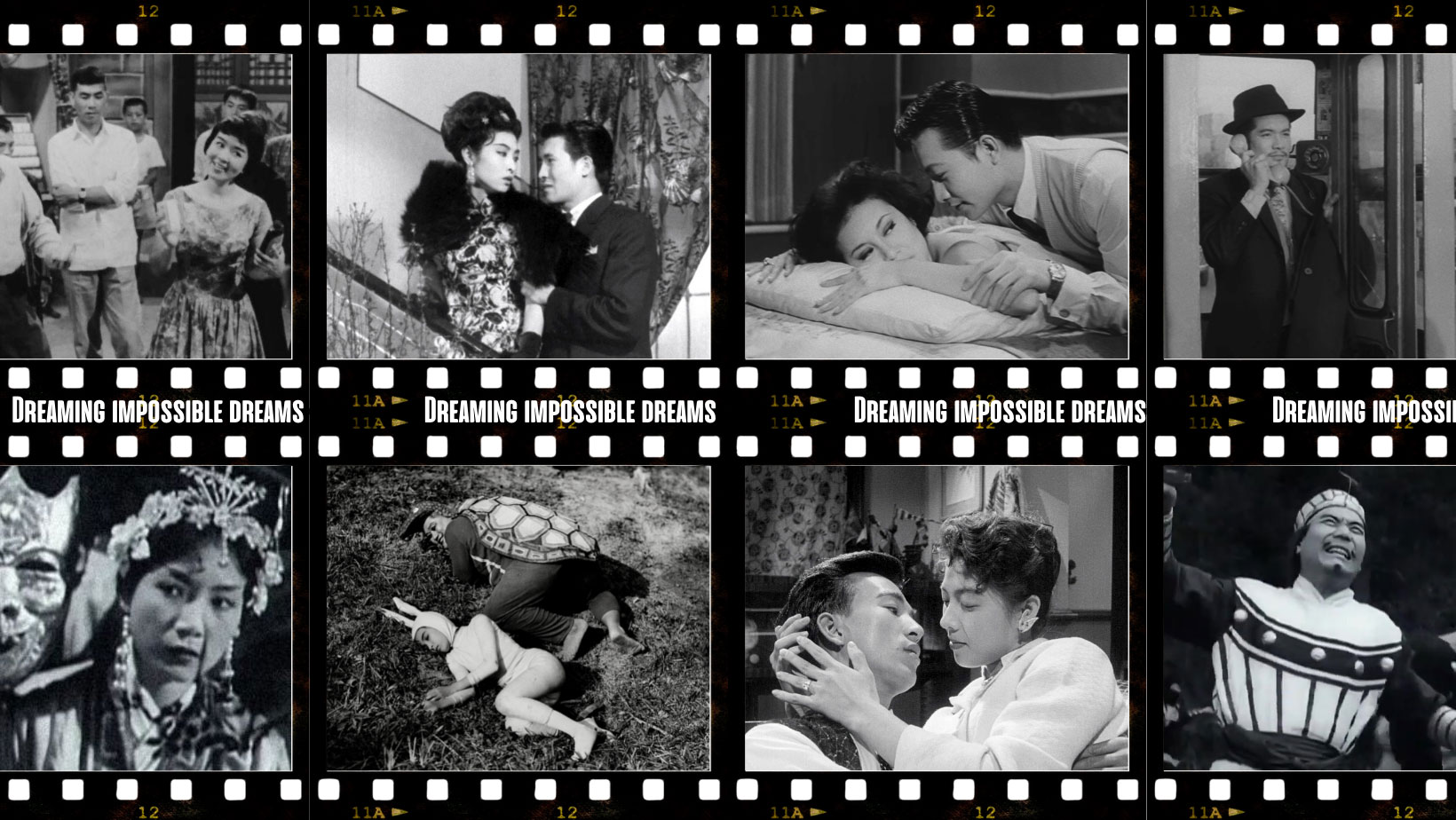 This May, celebrate AAPI Heritage Month with FILM at LACMA by watching this virtual film series that completely shatters any preconceptions you may have about the Taiwanese New Wave and Second New Wave periods. Despite their very low budgets and tremendous hardship behind the scenes, the titles in this limited run of restored films from the Golden Age of Taiwanese-language black and white cinema explode with themes of longing, lust, adventure, and fantasy. These films thrived despite being created during a time when the Kuomintang government ruled the island under martial law and promoted a “healthy realism” genre of film that only focused on positive themes and traditional moral values. Curated by Hanna Huang and Joshua Martin.

This program will screen 6 restored black and white “taiyupian” from Taiwan’s lost commercial film period of the 1950s-1960s. During this period, over 1200 films were made in black and white film and primarily in Taiwanese language. Of these 1200 or so, only 200+ have been identified and logged. A small selection of the films are being restored by the Taiwanese Film and Audio Visual Institute into 2K and suitable for theatrical viewing.

Co-presented by the Taiwan Film & Audio Visual Institute, the Taiwan Academy of the Taipei Economic and Cultural Office in Los Angeles (TECO-LA), and the Ministry of Culture of the Republic of China (Taiwan).

Dir. LIN Tuan-Chiu, Taiwan, 102 min, Taiwanese with English & Chinese Traditional Subtitles
Description: Tshiu-Bi reunites with her old classmate and friend Le-Hun, a destitute single mother. When Le-Hun falls ill in the middle of the street, Tshiu-Bi takes her in, not realizing that her friend and her husband had a past history. Unwittingly shaking up their comfortable middle-class marriage, more secrets emerge from this complicated love triangle.

Dir. CHANG Ying, Taiwan, 87 min, Taiwanese with English & Chinese Traditional Subtitles, Action Fantasy Fable
Description: A completely unique Taiwanese fantasy-fable-melodrama about the interactions between various animals in the forest. What makes this so unique is that the animals are played by actors dressed in rather inexpensive costumes. Oddly fascinating and involving.

Dir. SHAO Luohui, Taiwan, 106 min, Taiwanese with English & Chinese Traditional Subtitles, Wuxia
Description: King Gui’s two daughters become the victims of the Demon Society as the villains try to seize King Gui’s treasured Dragon and Phoenix Swords. When King Gui is at his wit’s end, Jhuge Shiro and Zheng Ping, two young swordsmen, turn up and solve the crisis. Made in the era of Taiwanese-language cinema, the traditional music and dance are incorporated in the film; moreover, the masks the gangsters wear have become a unique trademark. Since comic artist Yeh Hung-chia started publishing the comic series, Jhuge Shiro, in 1958, this production was the first live-action movie made based on the story and the only Taiwanese-language Jhuge Shiro movies that has survived.

Dir. PAI Ke, Taiwan, 98 min, Mandarin & Taiwanese with English & Chinese Traditional Subtitles, Romantic Comedy Musical
Description: Hsiao-fang Chin, a recent Chinese immigrant to Taiwan who loves to sing, quits school to work and earn money to treat her father’s illness. As she faces rejection from other Taiwanese (also known as benshengren 本省人) while trying to find work, she comes across two seemingly unrelated men who develop feelings for her and try to win her affection. Director PAI ke uses this romantic comedy to address the cultural and ethnic divide of Taiwan’s Han-ethnic majority populations.

Dir. CHANG Ying, Taiwan, 102 min, Taiwanese with English & Chinese Traditional Subtitles, Spy Thriller
Description: Star-crossed lovers Cuiying and Lingyun are caught in the crossfires of the politically turbulent period of the Sino-Japanese War. As the struggle of love and patriotism keeps getting more complex, a mysterious Special Agent 001 runs amok sabotaging the Japanese. This first ever Taiwanese-language spy movie produced in Taiwan is often compared to the 007 movies. The Best Secret Agent is a remake of a 1945 movie of the same name that caused a sensation in Shanghai.

Dir. LIN Tuan-Chiu, Taiwan, 109 min, Taiwanese with English & Chinese Traditional Subtitles, Spy Thriller
Description: A private eye spies on his ex-lover, who is the personal assistant for a steel company chairman. He knows various people’s dirty secrets and decides to start blackmailing them. But when his ex is found dead, he starts to investigate the suspects. This noir adaptation of a Japanese film was never released in the 1960s, but now we have the chance to appreciate this edgy and disturbing depiction of Taipei’s seamy underside during the Martial Law era.

Q&A WITH CURATORS OF DREAMING IMPOSSIBLE DREAMS
Dr. Erica Brozovsky (Host of PBS Digital Series OTHERWORDS and Programs Director of Taiwanese American Citizens League) leads a Q&A with co-curators Hanna Huang and Joshua Martin on how the series was conceived and what the audience has to look forward to.

A HISTORY OF TAIWAN'S LOST COMMERCIAL CINEMA - A CONVERSATION WITH DR. MING-YEH T. RAWNSLEY
Co-curator Joshua Martin talks with Dr. Ming-yeh T. Rawnsley about the history of black and white Taiwanese-language films. Dr. Rawnsley is one of the pre-eminent scholars of this genre in Taiwan cinema history and also the co-founder and editor of the International Journal of Taiwan Studies.

OUR AHGONG (GRANDFATHER), THE FILMMAKER
Three grandchildren of Lin Tuan Chiu (dir. THE HUSBAND'S SECRET & SIX SUSPECTS) speak with the series curators about growing up and learning about their grandfather's filmmaking career and how it influenced their own creative journeys.

MOVIE NIGHT WITH DAD: CHARLES YU WATCHES A TAIWANESE FILM WITH HIS FAHTER JIN
Author and showrunner Charles Yu and his father Jin Yu watch Little Heroes v. Two Masked Villains together. Charles Yu is the author of four books, including his latest, Interior Chinatown, which won the 2020 National Book Award for Fiction, was shortlisted for the Le Prix Médicis étranger, and longlisted for the Andrew Carnegie Medal for Excellence in Fiction. He has received the National Book Foundation’s 5 Under 35 Award, been nominated for two Writers Guild of America awards for his work on the HBO series Westworld, and has also written for shows on FX, AMC, Facebook Watch, and Adult Swim.